"If you are a citizen of the UK you can legally call yourself whatever you wish and use any title so long as you do not attempt to defraud. Titles have no legal reference to sex, gender or marital status. I can call myself Lady Letitia Farrant right this minute via an announcement in the press, then go on to open bank accounts or whatever in that name. Or I can change it online by deed poll for a modest fee in around ten minutes or by statutory declaration at any solicitor's or notary public for a tenner. Really, Della's name or lack of one is irrelevant and it proves nothing about the Farrant's wedding or absence thereof." - Felix Garnet (11 August 2015)

What does prove whether or not a wedding took place, however, is the Public Records Office. There is no record whatsoever, and when we listen to those more in the know we begin to understand why.

The image (above) reveals the normally secretive "Della Farrant" photographed by Polly Hancock in a local newspaper, the Hampstead & Highgate Express, at Hallowe'en 2013. The two images either side are of Colette Sully (aka Colette Gee) who was briefly David Farrant's second wife in the 1970s.

There are two reasons why the images of Sully are included. First, she bears such a remarkable resemblance to the person nowadays calling herself "Della Farrant" that they could quite easily be related, eg mother and daughter. Second, "Della Farrant" insists she is David Farrant's third wife.

One person who claims to have known "Della Farrant" before she became a public figure is Angie Mary Watkins who had already by that time visited David Farrant on various occasions at his bedsit.

These are a few of many comments about "Della" that Angie Mary Watkins has posted on Facebook:

"Her ['Della's'] name is Anna Hinton, and she is an attractive lady with long dark hair.Yet she uses a false name and won't be photographed. And when she is, it's her ...ahem... body parts we see. Lets face it, there is something distinctly dodgy about the whole thing. At first, no one believed he HAD a wife, or girlfriend, because he kept rabbiting on about her 'bear shoulders in the moonlight' and other such crap - and playing the whole thing for laughs! Once, years ago, Farrant's friends were treated to his liaison with a mysterious lady - called, above all things, Veronica Lake. This turned out to be non other than one of his mates [Rob Milne] dressed up! Quite why Farrant pulled this childish stunt was never revealed. Yet pulled it. He said when his liaison with Della was first bought out into the open, 'Why does no one believe I've got a wife?' With his track record, it's hardly surprising." (11 August 2015)

"Well after all her crowing that she didn't want the Bishop following her or doing whatever dastardly deeds she imagined he's going to do, I'll wager he's not even interested? She seems to have this over-inflated opinion of herself that no one else shares. Her real identity, after all the posturing and preening, is of a 'nobody' and a petulant 'nobody' at that. A nobody who is such a silly little twat that she goes mad every time someone does something outside of her circle. Like, for example, befriending those she seeks to smear as her 'enemies'!" (8 August 2015)

"Well, it WAS written, you have to remember, by someone who lived in a complete fantasy world? I got to know the real Della - her real name and quite a good deal of everything else that she chose to tell me about,backwards of 3 years ago. And all I can say is that this person came up with such a lot of rubbish in my chat box, about talking mongooses haunting her home etc, that it was clear to me she was absolutely doolally." (17 June 2015)

"I'll see you all in court! That should see a packed gallery.What I don't get is all this about eating lobsters, acting all refined, with David [Farrant] portraying himself like some kind of posh bloke. The Della I encountered (and I've no reason to doubt that she WAS the same Della) was someone the complete opposite to posh - she had had lesbian encounters, was a single mother who had to move out of her home through lack of money, ate ice cream, had experienced pretty dark things happen in her past, went to the pub, and had an ASBO! Mystery, indeed! With a capital M!" (7 December 2014)

"What was the asbo for? Probably trying any means of attracting attention to herself - when she kept popping up in my chat box - that was the impression I got. That she was the kind of person who just wanted to be noticed. ... In spite of not encouraging her at all she constantly popped up - and each time told a different tale - whether it was about being haunted by a mongoose who lived in her house to things she got up to with women. Not surprisingly, after being fed a diet of this on a regular basis, I got fed up with her and told her to bugger off. Which bought the response 'I'll talk to you in the morning when you are less annoyed'!" (8 December 2014)

A five-page threatening letter was sent by "Della" and David Farrant by recorded delivery to Seán Manchester's private address on 27 April 2015. He was out at the time. Somebody signed for it in his absence. When the envelope was passed to him he knew immediately who had sent it because "it stank of cigarette smoke."

The highly derogatory and abusive rant was signed by "Della Farrant" and David Farrant. Though the envelope was postmarked 27 April 2015, and the correspondence within was likewise headed with the same date, the senders dated each of their signatures as having taken place on 27 February 2015. Probably a Freudian slip! For it was on that day and in that month in 1970 that Seán Manchester first came to prominence on the front page of the Hampstead & Highgate Express, prompting him to remark: "I awoke and found myself famous." This was quickly followed by television appearances and coverage in a host of periodicals. David Farrant caught a brief ride on his coat-tails before quickly turning toxic with an addiction to meaningless self-publicity for its own sake.

"Della Farrant," Anna Hinton or whoever she is, was, of course, not yet born. That would be some years away.

This is how the five-page threatening letter to Seán Manchester, 27 April 2015, signed off: 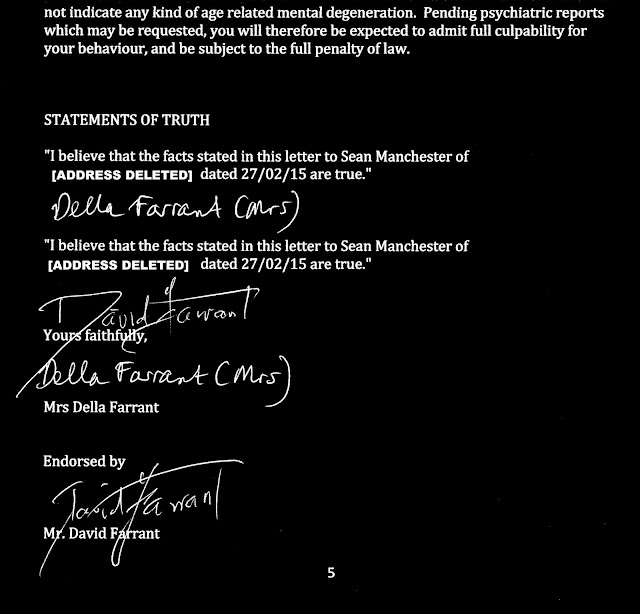 Seán Manchester didn't want to touch it, much less read it, and had somebody copy and forward it for the archive. He either filed it away or disposed of the original, but not before making a copy available for publication.

The five-page letter includes allegations which, in truth, apply to David Farrant, eg copyright infringement, defamation and harrasment etc, and once again reveals the true face of these people. The correspondence is deeply offensive and insulting. David Farrant and "Della Farrant" clearly object to the fact that they can't exploit Seán Manchester's work and abuse him in the process with impunity. He will take action if necessary.

Here is an example to give their hypocrisy some sort of context. A single thread on a Fascist blog, believed to have a direct connection to Farrant's chum and collaborator Kevin Chesham, finds Farrant posting over thirty comments from February to April where Seán Manchester is personally attacked, abused, threatened, defamed and quite obviously harassed to a degree seldom experienced by anyone on the internet. The incitement of hatred is quite unbelievable and many of Farrant's comments are copy and pasted rants, each running into hundreds of words. There is not one rebuttal from Seán Manchester (or anyone sympathetic to Seán Manchester) to the onslaught of comments from Farrant who is joined by anonymous cronies such as Redmond McWilliams.

Every time Farrant is interviewed on a podcast, programme or video he attempts to smear Seán Manchester who has only once mentioned Farrant in a transmission, and that was on 13 March 1970 on Today (Thames Television), which was to warn against him unwisely venturing into Highgate Cemetery at night, something Farrant proposed to do, as intimated in the Hampstead & Highgate Express, 6 March 1970. Farrant did not heed Seán Manchester's advice and consequently lost his liberty when he was arrested and held on remand at Brixton Prison after police searching for black magic devotees found him around midnight in Highgate Cemetery on 17 August 1970.

Ever since "Della Farrant" first manifested in the public consciousness five years ago she has been posting disparaging, derogatory and defamatory comments about Seán Manchester; especially on other people's websites, but also on her own blog. She and David Farrant are believed to be the creators of a Facebook page called "Bishop Bonkers" where, together with the familiar anti-Seán Manchester brigade of assorted diabolists and trolls who are also listed, they subscribe to libellous incitements against the man she is now hyprocritically issuing a complaint against. In fact, libel against Seán Manchester has become her stock-in-trade. A perfect example would be Steve Genier's "Nocturnal Frequency" podcasts where she and David Farrant have repeatedly been given a platform to malign and misrepresent the exorcist and author of The Highgate Vampire.

Ironically, the threatening letter sent in April 2015 refers to "mental health issues" and "psychiatric reports" and a "pattern of behaviour which spans decades." What is being witnessing is a classic case of transference. Both "Della" and her mentor Farrant are thought to have mental health issues. Back in 1970, David Farrant was the subject of psychiatric reports when he was examined by two psychiatrists who could not agree on his state of mind. One declared him insane while the other felt he was fit to appear in court and face criminal charges.

David Farrant has evinced a pattern of behaviour since 1970 (when he first came into contact with Seán Manchester) that can truthfully be described as obsessive, compulsive, harassing, deceitful, abusive, cruel, vindictive and malicious. He has admitted sending voodoo death dolls to total strangers he took against, and there have been others he knew personally who received his curses and threats. 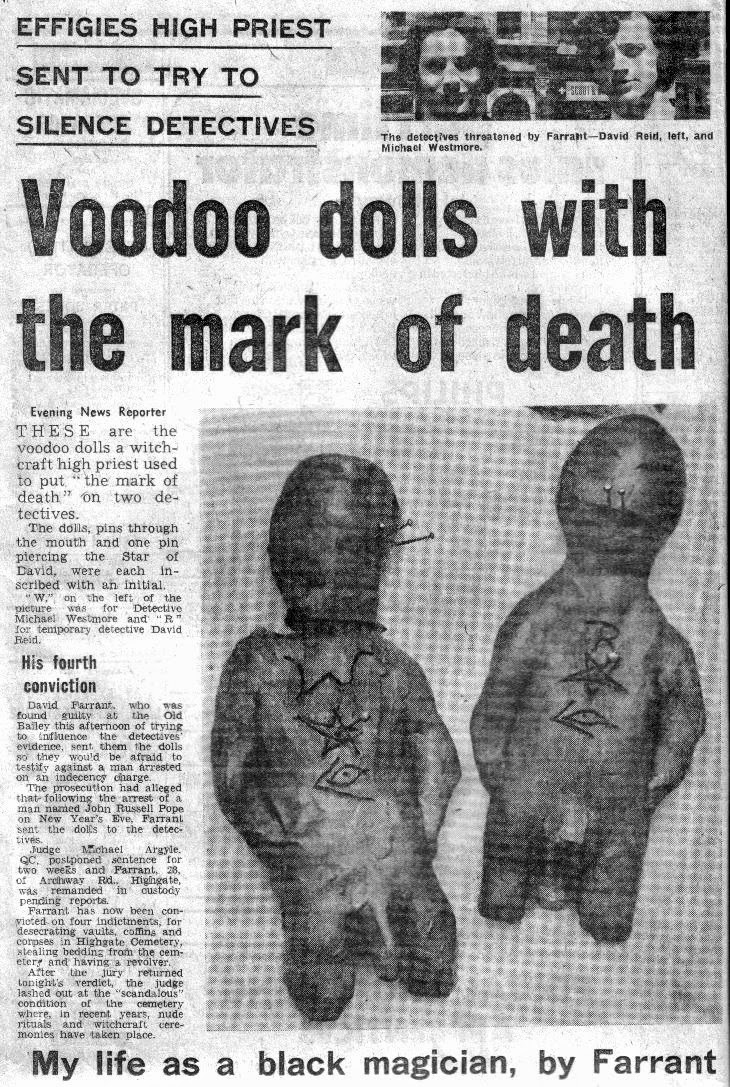 David Farrant and his colluding sidekick are now trying to play the victim, but it will not wash.

The pair of them threaten to open a can of worms that will explode in their faces. Decades of abusive and threatening material from Farrant is on record, including illegal uploads and copyright theft on a monumental scale. His stream of self-published booklets include stolen material lawfully owned by Seán Manchester. This is just the tip of a massive iceberg that would sink their boat if they ever tried to seriously launch any such attempt to gag those who provide an honest alternative to their lies.

What Farrant and his latest collaborator are trying to achieve by way of intimidation is the censoring of any individual who knows the truth; those who were around in Highgate circa half a century ago and remember what really happened, and those who today authoritatively raise questions Farrant cannot cope with and would definitely not want mentioned, much less talked about openly in public. 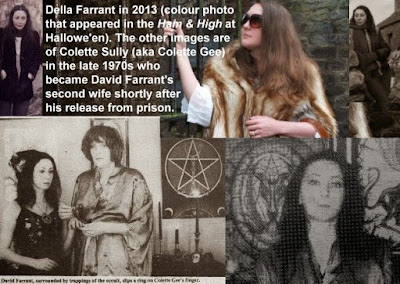