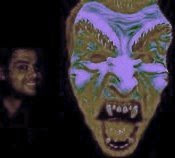 
Trystan Lewis Swale collaborates with two other people, Anthony Hogg and Erin Chapman, in his relentless pursuit of Seán Manchester. Like Swale, they are also totally obsessed with the English author and exorcist who is more than twice their age and whom they have not met. Hogg lives in Melbourne, Victoria, Australia and has never ventured to England or indeed Europe. Chapman lives in Vancouver, Canada, and has visited London, England. She briefly met Swale on 29 June 2015. 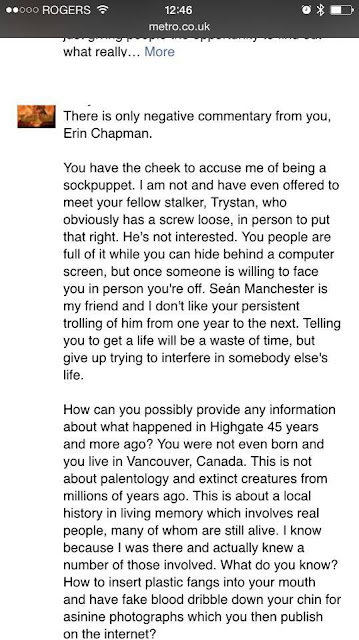 Erin Chapman does have a history dating back to the previous century of playing at being a vampire with plastic "vampire" teeth inserted into her mouth, artificial blood dripping from her mouth and an inexpensive black cape, probably also plastic, bought from a supplier of Hallowe'en fancy dress items. Such pictures of herself she readily shares with the rest of the world while expecting to be taken seriously as a "researcher" into all things to do with Highgate's history and Seán Manchester.

Chapman and Hogg run a website that publishes a plethora of puerile abuse and personal nonsense about Seán Manchester. Like Swale, the ultimate source of all their bile is convicted felon David Farrant. Sometimes it comes via another party on the internet who gleaned it from yet another party, but invariably all the misinformation, malice and defamation can be found to originate with Farrant.

"I’m not trolling anyone, simply ensuring people get the facts about the case. Manchester has not explained on numerous occasions about his so called 'purposeful misdirection.' He only did so after my article was published. This means you are calling him a liar, no disagreement from me. Manchester has made it very clear that no one is authorized to speak on his stead, so your comments mean nothing. ... Regarding the Highgate Vampire and Sean Manchester this may be of interest to you. Spent 6 months investigating his claims and it turns out there is more holes in his story than a sieve." - Erin Chapman (31 July 2015)

"What you are doing, Erin Chapman, is by definition trolling. I only came here to explain a couple of errors in Carri-Ann Taylor's article for Metro. You were not mentioned. Why should you be? None of this has anything to do with you. But along you came nonetheless to inject your poisonous vitriol about Seán Manchester who is invariably the sole object of your malice, together with links to your website which is obsessed with denigrating and defaming him.

"You were listed on an illicit (violates FB's rules) hate account by the name of 'Bishop Bonkers' where a collection of Farrantites, associated Satanists and fellow miscreants were also listed until the name of the account was changed to identify Seán Manchester by his real name. Within twenty-four hours the account previously named 'Bishop Bonkers' was permanently disabled by Facebook.

"You spam links to your hate site repeatedly on Facebook. Your nasty comments on Facebook and a variety of other places are in keeping with the behaviour of someone who is totally obsessed with another individual, ergo an internet troll. The person who co-runs your website is no less a troll with a history of stalking Seán Manchester for over ten years.

"Seán Manchester was discussing his purposeful misdirection regarding people and places mentioned in his book way back in the previous century before you even knew about the existence of him, his book or the Highgate Vampire case. So, nice try Erin Chapman, but no Hallowe'en outfit to replace your old one.

"Anyone can see I am not speaking on behalf of Seán Manchester. I am speaking on behalf of myself in defence of my friend. If you were to quote him in his entirety and not just select a short extract from what he said you will find that he has no problem with people doing exactly the same as me.

"Those more familiar with this endless saga will know that your quip is second-hand and repeated from another troll with whom you co-run your website. They will also know that both his and your allegations aimed at harming Seán Manchester stem back to the man who hoaxed a 'ghost' or, as in the case of the topographical locations, his so-called 'secretary' who, like her mentor, is waging a vicious hate campaign.

"As for you 'spending 6 months investigating his claims,' there are better qualified people than you who have met Seán Manchester and been given access to his vast archive of evidence who have spent more years than that researching his material who would certainly disagree with you.

"You are a stalker, Erin Chapman, who has a pathological compulsion to berate someone more than twice your age, who lives thousands of miles from your native Vancouver, about whom you know absolutely nothing. To that end you are willing to use second and third-hand and even fourth-hand material which all stems at source from a man who was convicted of crimes at Highgate Cemetery for which he was sentenced to almost five years' imprisonment. Every single attack made by you here and on your website against Seán Manchester can be traced back to that man or one of a handful of flunkies he has in his pocket.

"The accusations you and your collaborator make against the author and exorcist you both envy and despise frequently apply to the pair of you. This is called transference and it is not uncommon with trolls. Your Australian collaborator has falsely called Seán Manchester a 'sociopath,' but it is obvious to me that the pair of you are clearly the real sociopaths."

Erin Chapman's fellow troll is Anthony Hogg who is probably the worst example of the lot of them.

It is curious and somewhat telling that rather than use a likeness of himself, until 17 August 2014 Hogg hid behind the filched picture of an American actor as his representational image on Facebook. Prior to that he used a photograph of himself wearing what can only be described as a devil mask. See image at the top of this page. We could almost be forgiven for thinking he was ashamed of who he really is, ie an Australian young man of Aboriginal extraction who was born at least ten years after Brad Pitt, the icon he misleadingly offered to Facebook users, and significantly later than the events at Highgate Cemetery, London, England, which so obsess him. Hogg is in denial about many things, but mostly about himself. He claimed to be people other than himself, and when confronted with his true identity he denied it. He did the same with his name, originally hiding behind pseudonyms.

Hogg finally came clean a decade after his obsession with Seán Manchester and his bestselling book about Highgate, and admitted that he had lied about the photograph he had told everyone was not really him. This is what Anthony Hogg stated on one of his multifarious blogs on 30 April 2014:

"Ok, so I lied. Yes, it’s me. You got me there! Why did I lie? Because I wanted to protect my identity. ... Yes, I use a picture of Brad Pitt on my Facebook page, specifically a picture of him in his role as Lt. Aldo Raine in Inglourious Basterds (2009) — one of my favourite movies, by the way. Does [Seán Manchester] honestly think I’m trying to get people to think I’m one of the most famous actors in the world? Surely he can’t be that daft. So why do I use that picture? Two reasons, actually. One, to obscure my identity. Two, what role does Pitt play in the movie? And what is [Seán Manchester]? I’ll leave you to work that out. Suffice it to say, it’s a sly poke that’s seemingly gone over Herr Manchester’s head."

The last remark is Hogg's oft-repeated adoption of a despicable smear made by David Farrant and a latecomer to the latter's hate-fest by the name of Kevin Chesham (a man who is himself the very thing Hogg falsely alleges about Seán Manchester) who has been colluding with convicted felon Farrant to incite malice and cause harm. Intelligent observers see through this miserable pair, but it suits Hogg's purpose to use Farrant's disgusting propaganda at every available opportunity. It should be noted that Farrant has criminal convictions for indecency, threatening police witnesses in an attempt to pervert the course of justice, malicious vandalism, desecration involving black magic in a cemetery, possession of a handgun and ammunition, and theft of items from a hospital.

Hogg's tactic of identity transfer to the object of his malice, ie accusing any person he is displeased with of being Seán Manchester using a pseudonym when that is clearly not the case, will not wash with the more discerning among us, and we are certainly not going to dignify his ludicrous accusations where any particular individual is concerned whom he tars in this way. Hogg's method is cribbed from a convicted graveyard vandal whom Hogg claims to be critical of — and on the surface certainly seems to be — but all of Hogg's stratagems and propaganda against the author and exorcist Seán Manchester can be sourced either directly to Farrant or one of Farrant's cronies.

On 17 August 2014, Hogg finally revealed himself to the world. His new Facebook profile is 100% genuine. The real Anthony Hogg can be seen below, alongside his principal source, David Farrant. 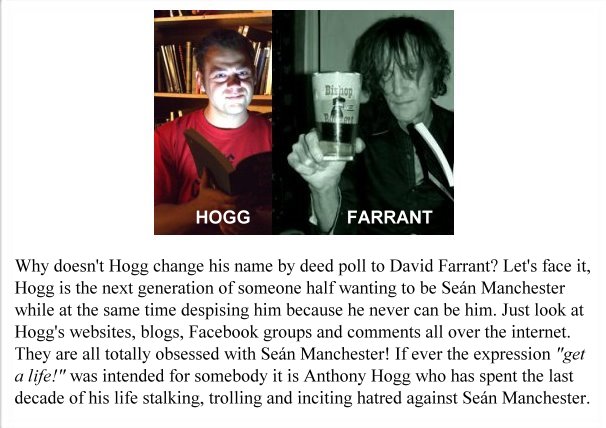 Anthony Hogg is Facebook friends with Farrant's son, Jamie, Farrant's lieutenant, John Pope, who engaged in a series of Crowley-like attempts to summon a demon in December 1973 when the pair of them were arrested and appeared at the Old Bailey, and innumerable dabblers in the black arts.

Seán Manchester first publicly commented on Anthony Hogg when he opined some years back:

"Anthony Hogg, ultra-liberal, modernist, claims to be a non-conformist Protestant 'Christian' but evinces exceptionally unChristian behaviour, eg profane and sacrilegious utterances against an ordained and consecrated Christian. There is hardly a day that passes where Hogg is not trolling and posting harassing comments about me somewhere on the internet. This self-proclaimed Christian's cyber-friends are either immersed in witchcraft and/or diabolism, or boast about their atheism. Constantly critical of me because I am a Traditionalist Bishop, Hogg opts to remain anonymous — either using an image of Brad Pitt, or wearing a demonic 'devil' mask to hide his face and identity." *

* As already stated, Hogg came out of the closet on 17 August 2014 when he began using his true likeness for the first time. Like so many wannabes, he finally realised self-publicity is pointless unless he basks in it and everyone is aware of who he is. Hogg chose to become a publicity-seeking troll, bringing him even further into alignment with Farrant, the ultimate bandwagoneer and stalker. 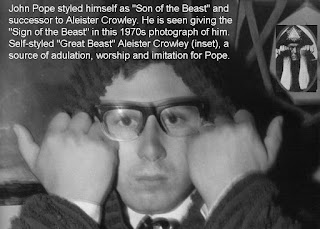