Moping of the Morden Molly 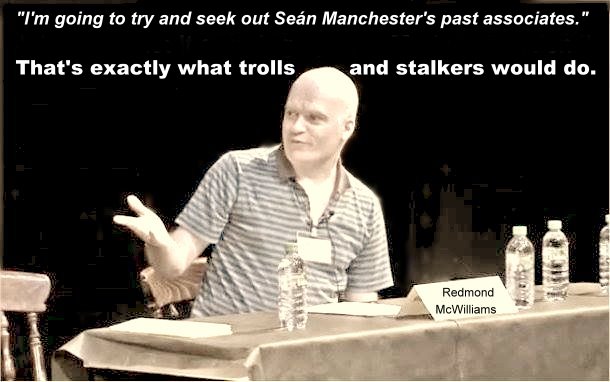 "The best way to deal with trolls [sic] like Manchester is to block them. He's had his fair share of chances, and he's blown each one. And I for one will no longer enter into any further dialogue with him - either directly or indirectly. Instead I'm going to try and seek out his past associates. Maybe they can help shed some light on past activities? Only time will tell I guess." - Redmond McWilliams

The methodology of trolls like Anthony Hogg and Redmond McWilliams is sometimes to project onto their victims their own bad behaviour. Thus McWilliams has recently taken to calling Seán Manchester a "troll" - a stratagem he has learned from Hogg - while in his second sentence providing clear evidence, if evidence were ever needed, that McWilliams himself is the troll.

McWilliams declares that he will "directly or indirectly try to seek out Seán Manchester's past associates" without fully realising the implication of what he is saying. He supports Hogg's stalking of females who really do not want their privacy compromised and will involve the police if it is.

This most curious person, who has been David Farrant's lackey for quite a number of years, claims that Seán Manchester has had his "fair share of chances" and apparently "blown each one." What is this odd character blathering on about? Seán Manchester has had nothing to do with McWilliams and has neither sought nor wanted any "chances" (whatever that means) from this Farrant puppet. What McWilliams really means is that he has vainly lived in hope that he might be given a chance to get a foot inside Seán Manchester's door, but, since renewing his allegiance to Hogg earlier this month, has now abandoned any hope of achieving that, which includes dialogue with Seán Manchester.

Redmond McWilliams' cherry on the cake is his advice to block trolls, something Seán Manchester would absolutely endorse, which is why Seán Manchester has had McWilliams blocked on Facebook for as long as McWilliams has been on Facebook. This sad individual stalks Seán Manchester and posts derogatory abuse wherever he finds any mention of him. He has trolled compulsively on Farrant's (and now Hogg's) behalf for a decade. It must be very frustrating for the Morden Molly (one of several nicknames he has acquired, another being the Gnome) because his obsession has failed to be satiated, and he has achieved nothing besides becoming a figure of much odium and ridicule.