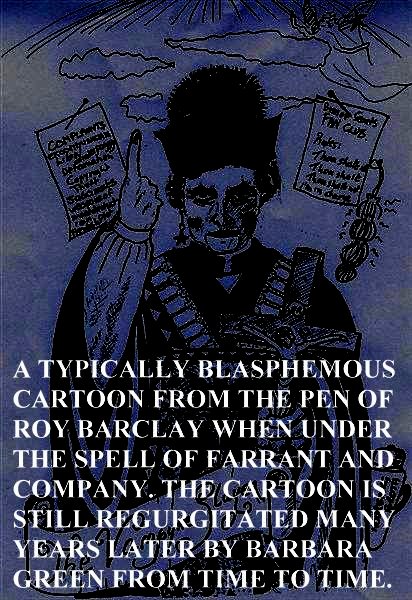 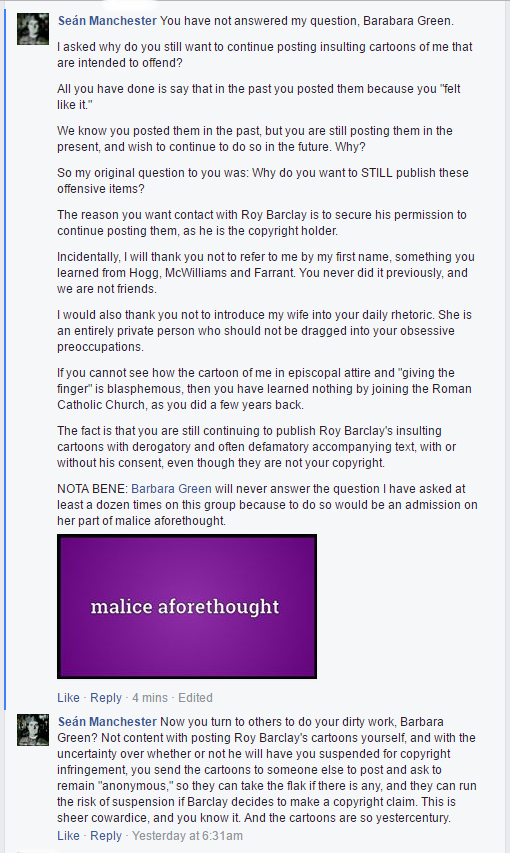 Seán Manchester was commissioned to take photographs at the Barnet Carnival in Hertfordshire in 1986 where he made accidental contact with Barbara Green and Ruth Harrington who had a stall advertising their "Yorkshire Robin Hood Society." He took some pictures of their display for them.

The following year he attended the same carnival, but not as its official photographer, and met Barbara Green and her daughter, Laura Green. They still had the YRHS display on an outdoor stall.

He did not meet Barbara Green again after that second occasion in Spring 1987, but a correspondence was entered into whereby he endeavoured to help Barbara Green's and Ruth Harrington's historical society, which seemed to have very little support. The society's membership eventually dwindled and became redundant after several attempts to revive it. Barbara Green showed an interest in things paranormal, as there had been talk for many years of strange goings-on in the Kirklees area. Seán Manchester held an overnight vigil with some assistants to determine the nature of the disturbances. His findings were largely inconclusive, albeit not without supernatural incidents.

In 2001, Barbara Green self-published a slim volume called Secrets of the Grave wherein derisory cartoons of Seán Manchester featured along with some disparaging commentary. This coincided with Green having recently entered into communication with a certain David Farrant. It was downhill from that moment. Farrant attempted to turn Green, and she treacherously obliged. Green would pay visits to Farrant in his London bedsit, and he would visit her in Brighouse, West Yorkshire. In April 2005, Green accompanied Farrant, a satanic apologist by the name of Gareth Medway, and a handful of others (who were mostly concerned with video-taping the proceedings) to the gravesite on private land at Kirklees where a pseudo-occult ceremony took place over the purported grave of Robin Hood.

The occult ritual held over the tomb by Farrant and Medway (with Green) came exactly fifteen years after Seán Manchester had carried out his nocturnal vigil. Like Highgate's vampire contagion, Farrant caught a ride on the coat-tails of Seán Manchester to engineer publicity for himself. The entire debacle in 2005 was filmed on video by a group calling themselves "Red Monkey Films," and photographs from that evening's skullduggery quickly surfaced in Barbara Green's local newspaper.

Since that time there has been no communication between Barbara Green and Seán Manchester, bar the odd postcard bearing sarcastic messages from her, and a Christmas card showing Santa Claus brandishing a dagger. In September 2016, Seán Manchester approached Barbara Green on a neutral Facebook group administrated by Angie Mary Watkins and David Burbury, to enquire why she was persisting with her vitriolic campaign against him in the wake of her now having fallen out with Farrant and his hangers-on. It became increasingly apparent to Seán Manchester over the course of the two weeks they had contact that Barbara Green's state of mind had seriously deteriorated. A lot of what she said made little sense, and was no more than garbled obsessions about minutiae that was not important in the first place. By the end of the month, Seán Manchester could see it was a hopeless task, and that Barbara Green was too far gone to approach. He had done what he could to make her see reason, but it was to no avail. He finally declared: "Life is too precious to be caught up in your frenzied disquietude. There is something just too disturbing and devious at work here." 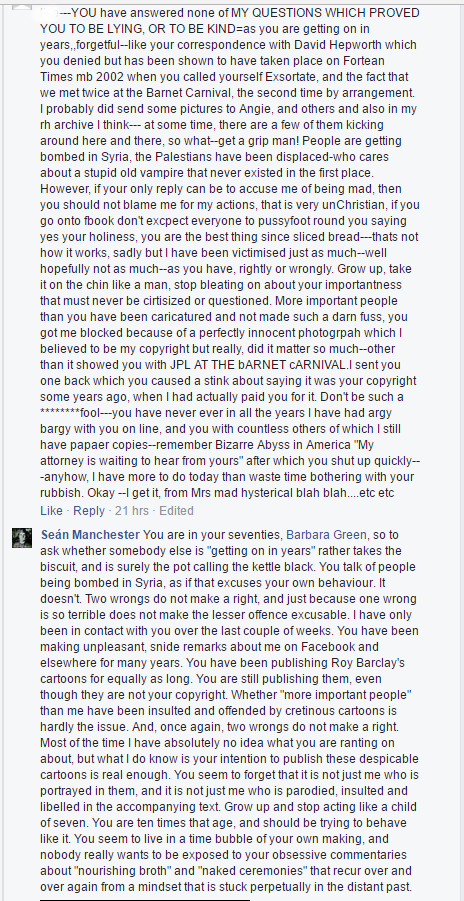 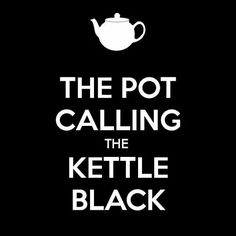 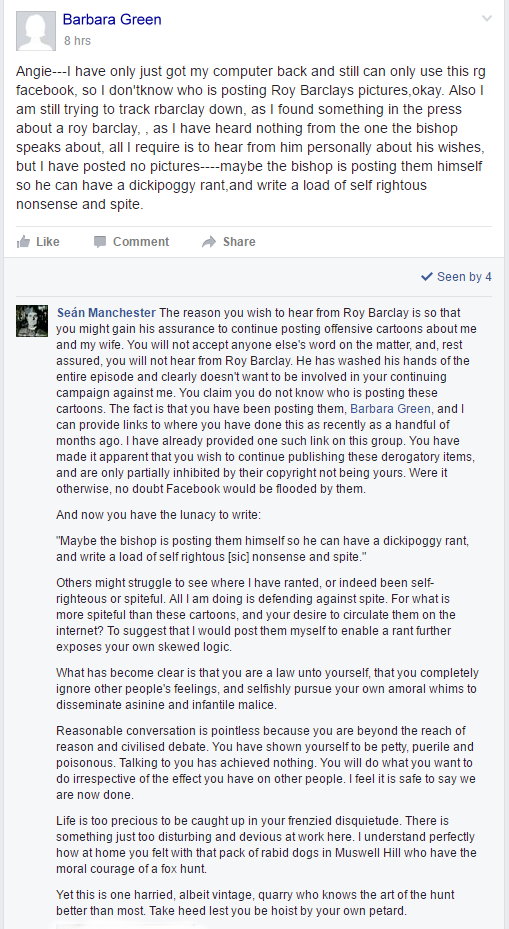 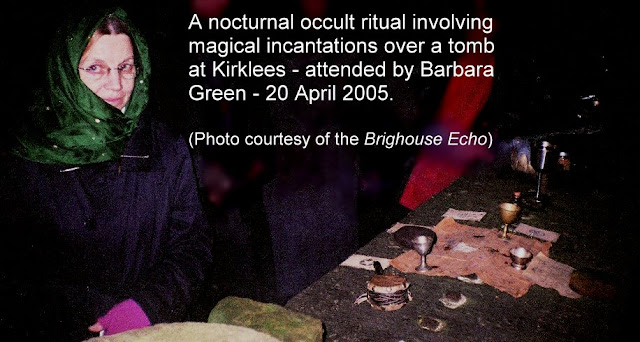