Sorenti Speaks ~ Then It's Roger And Out! 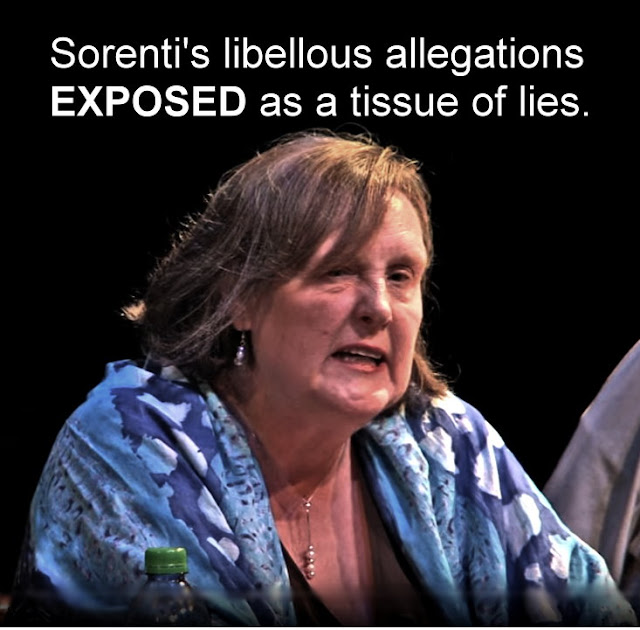 "I am still waiting for Patsy Sorenti (née Langley) to produce her 'evidence'." — Seán Manchester

"My friend told me that he had seen the film back in the late 1960's, when said friend was a student in London and became one of [Seán] Manchester's 'set.' Quite independently from [David] Farrant, this was. Friend told me that he ([ Seán] Manchester) had invited a small gathering of people to watch this film, which was in colour but had no sound. It was called 'The Vampire Exhumed' and [Seán] Manchester was playing the vampire and the vampire hunter. His girlfriend played the victim of said vampire and it was shot in Highgate Cemetery. At the end, there was footage of [Seán] Manchester and girlfriend having sex, but that was quickly turned off. Friend was impressed with the special effects, and asked how it was done. [Seán] Manchester then told friend how he did it, with flour paste, a fan and time lapse photography." — Patsy Sorenti (née Langley), ASSAP forum.

"As previously stated, I wrote a manuscript titled 'The Vampire Exhumed' in the late 1970s. This unpublished manuscript was the inspiration (at least, its title was) for a professional French art house film alluded to in a 1982 Time Out article. I was involved in that film which manifested almost quarter of a century after the bogus 8mm film that Farrant, and now Sorenti, have been falsely harping on about." — Seán Manchester, ASSAP forum.

"What's more, my informant told me that at the end of the film, there is a piece of footage showing [Seán] Manchester and Jacqueline in the throes of coital relations. ... Like I said, I am quite happy to disclose my contact re: the film if [Seán] Manchester were to unblock me." — Patsy Sorenti (née Langley), ASSAP forum.

"He has blocked me Anthony [Hogg]. He might say he hasn't but he has. He isn't exactly an ingenue when it comes to fibbing." — Patsy Sorenti (née Langley), ASSAP forum.

"Patsy Sorenti seems completely unaware that the word 'ingénue' applies only to a woman; indeed, to a young woman who has little experience and is very trusting. That safely rules us both out. But enough of the English lesson. A way of proving that I have not blocked Patsy Sorenti is for her to start posting on this thread." — Seán Manchester, ASSAP forum.

"I told you before, I WILL NOT PUBLISH NAMES ON PUBLIC BOARDS OF PEOPLE WHO HAVE NO ASSOCIATION WITH THE GROUP. PERIOD. For those who don't like that - tough."

Within an hour, Seán Manchester had responded with the following suggestion based on her promise:

"What is preventing you from sending 'information' by private message, as promised? Then we can begin the procedure of examination and investigation. Or do you only want to spread salacious gossip, originating with Farrant, where all and sundry are able to read it? I have been libelled by both you and Farrant. The onus is on you to substantiate what you have said. Alternatively, you should withdraw what you have alleged and apologise to all those whom you have named."

Patsy Sorenti then exploded (for the final time on this topic) with the following statement:

"I can substantiate EVERY WORD. I have all my evidence here and No, why should I apologise? I haven't named anyone--yet!"

However, a little over thirteen months earlier she did name somebody, and she provided a forename.

Click on the image of Sorenti at the top of the page. It will link to a video. Seven minutes into the video we hear this so-called "secretary" of Farrant's non-existent "British Psychic and Occult Society" (a name he cooked up circa 1983) talking to an audience above a pub in Highgate Village on 19 July 2015. She was rather more forthcoming than she is now. This is what she claimed:

"About 2003 to 2004, when I began researching this case, I had a friend, I still have him, I still know him. His name is Roger [surname bleeped out on the video], and he is a computer scientist. In the 1960s [when Patricia Langley herself was a very young child; she was barely ten when the case first hit the headlines in the following decade], he was studying computer science at the University of London and my friend Roger was into the vampire scene, the vampire sphere. And the sphere, the whole paranormal was something he was into and is still into. And he came into contact with Mr Manchester and became a good friend of his. And Roger, in 2004, told me when I was researching, 'Do you know about the film that was made?' And I said, 'Well, I know of it. Can you tell me about it?' And he said, 'Well, yeah, I can tell you about it because he invited me and a few other students that were studying at the University of London to go to a screening at his house one Saturday evening and this Jacqueline was there laying on a few nibbles, and drinks and things, and they settled down to watch this film, The Vampire Exhumed. And this Vampire Exhumed was the story of a vampire hunter who chases out a vampire, seeks out a vampire, in Highgate Cemetery. Made in colour, but it had no sound. It was full colour, but it didn't have any sound. [Seán] Manchester on film was playing both the vampire hunter and the vampire. And so I said, 'Well, this is the second independent case of the film actually having been seen by someone other than David [Farrant]  who saw it with others, and for which [Seán] Manchester categorically denied it. And Roger then revealed some quite good technical details about the film. He said, or he offered to me, details about the decaying scene of the vampire. What it was, [Seán] Manchester covered himself in flour, wet flour on his face, let it dry and after a little while it dried and fans were used and a hot breeze was used to blow the flour from his face so it looked as if his skin and the muscles and everything of the vampire's face and body was disintegrating. And I knew at that time [Seán] Manchester was a very good photographer. Very adept in technical effects of this kind. And Roger told me that this is how the effects of the vampire decomposing were achieved."

This is the steadily metamorphosing account that owes its origin entirely to David Farrant who has even claimed that images of the vampire corpse in The Highgate Vampire book were taken from this non-existent film. "Roger," of course, will never come forward to be identified because he does not exist. Langley claims that she "knew at that time" that Seán Manchester was "a very good photographer" and "very adept in technical effects of this kind." In fact, Seán Manchester was a portrait photographer with his own studio and a permanent staff of five people, but he did not have any expertise in ciné film, much less technical effects using ciné film. How would Sorenti know such a thing? She would have been barely a seven-year-old at the time. Farrant is her exclusive source.

"When I put this to [Seán] Manchester in my research - it wasn't just David [Farrant] I interviewed, I did eventually ask for an interview with [Seán] Manchester and I did put these points to him in 2004 - not only did he categorically deny that this film exists, existed, but [he] told me I was all wrong, a complete liar, that I was a member of Farrant's evil cabal, and so on."

In actual fact, Seán Manchester has never spoken to Patsy Sorenti, and has never discussed anything to do with the Highgate Vampire case with her. She did not interview him. It is all fabricated. 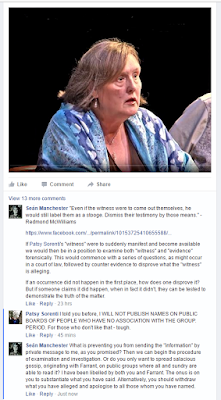 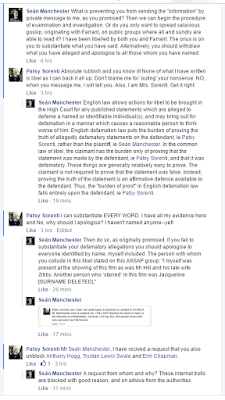 Patsy Sorenti had promised in a comment on Seán Manchester's thread on the ASSAP forum:

"When you message me, I will tell you."

Seán Manchester messaged her, and as can be seen below, Sorenti did not respond. She has still not responded. Her libellous allegations are spawned from Farrant, and have been exposed as lies. 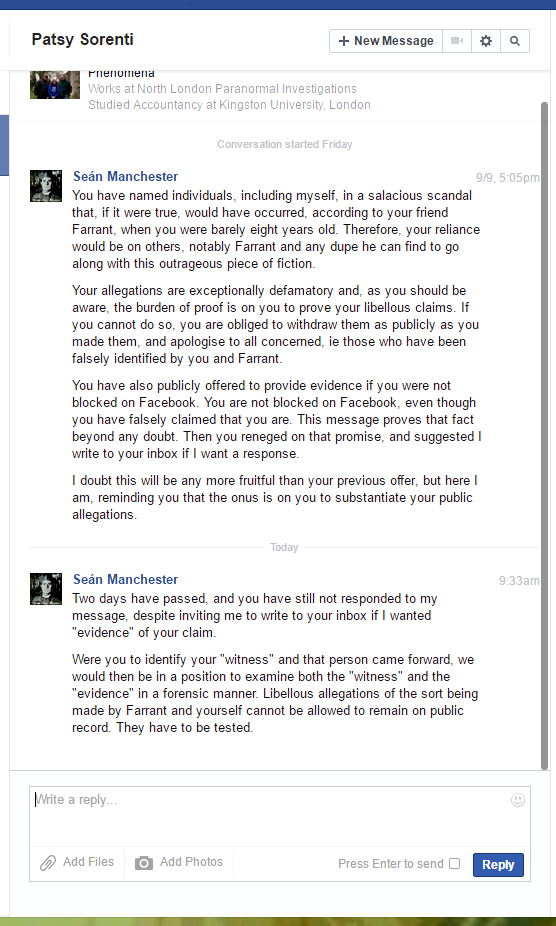 Two more nails in the coffin of defamatory allegations made by this odious pair are Farrant naming Tony Hill and Jacqueline (Seán Manchester's girlfriend at the time) being part of the supposed gathering. Hill, of course, was living two hundred miles away in Devon (with the barmaid he had run off with) during the time-frame alleged by Farrant. And, of course, both will hotly deny the allegations.