A Low and Hollow Place 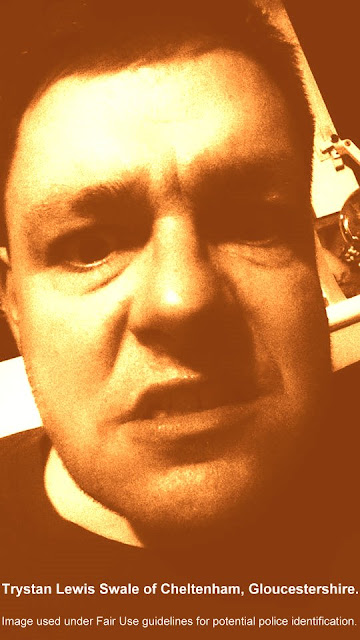 "CHELTENHAM, 6 February 2016 – Vampire enthusiasts are asking for the public’s help in finding Elizabeth [.......] and Jaqueline [sic] [......]. The two women are reported to have been attacked by a vampire in North London during a spate of incidents that occurred between 1969 [sic] and 1973. The first hand testimony of these victims promises to settle the mystery of the ‘Highgate Vampire’ ... So far, neither [Anthony Hogg's and Erin Chapman's website] or [Trystan Lewis Swale's website] have been successful in their attempts to trace [Elizabeth] and [Jacqueline]. Members of the public who have any knowledge of their whereabouts are encouraged to [make contact]." - Trystan Lewis Swale

Let's get the mandatory mistakes and obvious deceits made by Trystan Lewis Swale out of the way:

1. The only "vampire enthusiasts" requesting the public to help track down these women after the passing of approximately half a century are Anthony Hogg, Erin Chapman and Trsytan Lewis Swale.

2. The spate of incidents regarding Elizabeth's recorded experiences began in 1967, not 1969.

3. First-hand testimony of Elizabeth was recorded in The Highgate Vampire (1985 & 1991), and also transcribed on audio and, later, video (DVD). The other named female, Jacqueline, was not "attacked by a vampire" and her identity is not that falsely attributed to her by Hogg, Chapman and Swale.

Seán Manchester's response on Facebook sums the whole sorry situation up most aptly:

"Hogg, Swale and Chapman, none of whom were alive at the time the Highgate Vampire case was making headlines throughout the media, are trying to track down two women by spamming their intent to stalk them across the internet. One of the women is misidentified as 'Lusia' and deserves to be left in peace. The other had enough of a traumatic experience half a century ago without having stalkers chasing her down to wherever she lives in order to interrogate her. I happen to know she wishes to be left alone in order to live out her days in peace. No pensioner wants the uninvited attention of stalking trolls who will only bring tumult into an erstwhile private existence. The actual women themselves would hardly want to be pursued at this time in their life by latter-day publicity-seekers whose sole source of falsehood and misinformation is David Farrant. One of them was a professional model half a century ago who was prepared to give testimony against Farrant at Highgate Magistrates Court over threatening and harassing telephone calls. Since then she has become an extremely private person who has an absolute right to enjoy a private family life. The same goes for the other one who is identified in The Highgate Vampire due to experiences she underwent in the 1960s. That history of long ago exists in print and in a video transcription. There it should be left because she, too, wants to be allowed to enjoy a life without such unwelcome intrusion as the likes of these latter-day bandwagoneers intend. Maybe they will contact the police if they hear about Hogg's and Swale's campaign to track them down?" - Seán Manchester (7 February 2016)

"Someone is trying to help Hogg and Swale hunt these people down who is also a member of this [Facebook] group. The number of females totally unconnected who stand to be bombarded and invaded with all manner of things, not just by trolls but also others who read the spam they are putting out, just because they have the same or a similar name, is unacceptable." - Robert Darnley

"I note the points you and Seán [Manchester] have raised. After giving the matter some thought I have removed my relevant post, and will not be investigating this matter further." - Andy Pryce

"It is in the interest of any number of women out there who might end up being harassed due to the Hogg-Swale 'search warrant.' Yesterday I spoke at length to Elizabeth, one of the two women being sought by Hogg and Swale. She again reiterated that claims made by David Farrant that she was contacted at work by an emissary of his decades ago is absolute nonsense and utterly false. On the current situation, she made very clear that the protection of her privacy is paramount with the police now probably having to be alerted and the names of all her stalkers being provided. In the case of Trystan Lewis Swale an address in full is known and any attempt to compromise this lady's privacy will result in immediate action." - Seán Manchester (9 February 2016)

"Have these people nothing better to do than stalk defenceless women? They seem to spend their whole existence as parasites feeding off something that no longer exists and is a part of history." - [The female who made this comment has purposely not been identified for her own protection.]

Should anyone be wondering about the title of today's blog, the definition of the word "Swale" is: "a low and hollow place." The meaning of "Hogg" requires no explanation, but hogs tend to like low and hollow places in which to wallow. The word can also mean: "to curve up in the centre and sag at the ends as a result of strain." Names clearly sometimes hold a significance for their owners.

This canvas portrait in oils of Elizabeth was painted by Seán Manchester in the previous century: 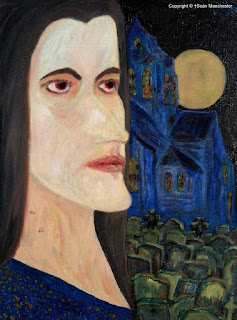